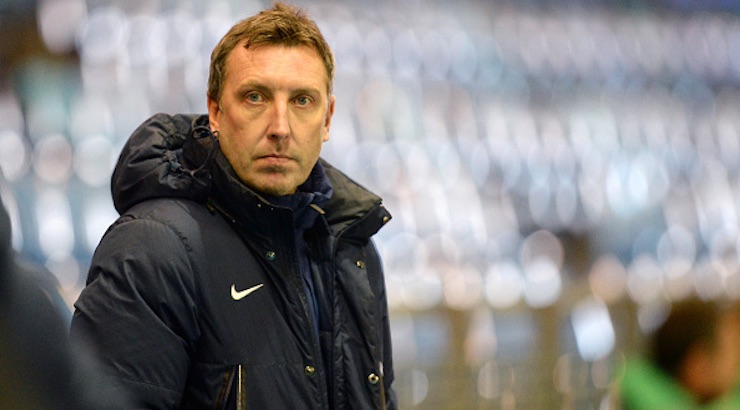 THE POTENTIAL TO GROW SOCCER IN AMERICA IS SO EXCITING.

Youth Soccer News: 46-year-old Jason Wilcox is a former pro player turned coach who loves being on the pitch and has slowly become used to sitting behind a desk as the Director of the Manchester City Youth Academy.

The Manchester City Football Club story is simple and one of a rise to greatness. This year, Manchester City won their third Premier League title in six years — a fantastic achievement for head coach Pep Guardiola and his team. While there is no question the club has the resources to buy top players, Man City is always looking to develop homegrown talent.

It is a serious responsibility to be in charge of raising the next generation of Man City players — and one that Wilcox has embraced completely.

As a former pro with a distinguished playing career, Wilcox knows what it takes to make that journey from talented youth to successful pro.

As a youth soccer player, Wilcox joined the Blackburn Rovers at 16 years of age and played in over 300 games and scored 33 goals at the club. Wilcox also played as a winger for Leeds, Leicester, and Blackpool and earned his first cap on England’s National Team in 1996.

As a coach at the Academy for the last five years, Wilcox has taken the U18s squad to a national championship title and two FA Youth Cup finals. Now Wilcox has left the sidelines on a daily basis to guide the storied club into the future.

As head of the youth academy, Wilcox’s primary job is to develop players for the first team and this is a responsibility the longtime coach embraces with pride.

Diane Scavuzzo: Congratulations on the Premier League victory and being appointed the Director of the Manchester City Youth Academy.

Jason Wilcox:  Thank you. It’s been a whirlwind year. I’ve got to be honest, it has been one I’ve thoroughly enjoyed.

ATHLETICISM IS ABOUT MOBILITY AND AGILITY.

Jason Wilcox: At Manchester City, players have to have a high technical level, but also, one of the most important traits that I recruit on is the brain.

A PLAYER’S WILLINGNESS TO BE THE BEST PLAYER THAT THEY CAN POSSIBLY BE, THEIR INTELLIGENCE TO UNDERSTAND AND TAKE AN INSTRUCTION PLUS THEIR ABILITY TO LISTEN ARE ALL KEY ATTRIBUTES.

At Manchester City, we’re looking at the well-rounded individual. Players have to be technically good, and they have to be intelligent with the right mental makeup to bounce back from setbacks, and to overcome challenges.

What I’m trying to do in our program now is make sure that we look for these characteristics very, very early. It’s obviously very difficult to do. We’ve got an idea of athleticism and athletic potential and, we’ve got an idea technically gifted player, but players develop their technical skills over a course of years.

WHAT I’M REALLY INTERESTED TO SEE, CAN WE SPOT THE PLAYER THAT WOULD DO ANYTHING TO PULL ON A SKY BLUE SHIRT?

Can we spot the player who is able to understand and take instructions? That’s quite difficult.

I’ll give you an example and this is a broad, generic statement, but I’ve never seen somebody who’s very, very lazy become a workaholic.

Likewise, I’ve never seen somebody who’s a workaholic all of a sudden become lazy.

Jason Wilcox: We probably have been in the USA three or four times with different age groups this year.

PLAYING SOCCER IN THE USA IS MUCH MORE THAN A FOOTBALL EXPERIENCE.

The football, of course, is the reason why we actually go, but the experience of traveling and experiencing different cultures is also valuable.

For example, when the boys were in Texas, they went into the Dallas Cowboys football stadium which gave them an experience that was really special,  an experience they can look back on for the rest of their life.

Player development is more than when an individual player goes on the grass and plays 90 minutes. It’s everything — and these international experiences are where we find out about our players as individuals.  Our Under-14s traveled across the Atlantic to San Diego take part in the Nexen Manchester City Cup recently.

Diane Scavuzzo: What do you think of the Nexen Manchester City Cup?

Jason Wilcox: The Man City Cup is one of those unbelievable experiences, even for me.

I’VE BEEN IN FOOTBALL A LONG TIME, AND I’VE NEVER SEEN A TOURNAMENT LIKE THE MAN CITY CUP, EVER.

As you know, I’ve been previously to coach a team in that competition and it’s an amazing tournament. It is a great experience for youth players.

Diane Scavuzzo: I remember chatting with you when you were at the 2015 Man City Cup. Looking back, what are your best memories?

You simply can’t explain the magnitude of the Man City Cup unless you have seen it for yourself. We do not have tournaments like that here. The Man City Cup is one of the biggest youth tournaments, in terms of scale.

Diane Scavuzzo: What makes the Man City Cup so special?

Jason Wilcox: The mixture of the girls and the boys playing soccer is terrific.

The actual standard of the girls was very high — I came away blown away by the standards of girls’ football in America. I actually thought it was better than the boys in many respects. It really impressed me. The people, the friendliness — I’m looking forward to experiencing this again in the future.

Diane Scavuzzo: Are there specific nutritional guidelines set for players when they travel?

Jason Wilcox: Absolutely. We have a head of nutrition for our Academy who actively advises the boys … It’s part of a series of workshops on how you prepare for games, how you recover from games, what are the right foods to eat. Nutrition is very important.

Diane Scavuzzo: When I started interviewing European coaches eight-years ago, most did not believe that American kids could play quality soccer.

People said American youth soccer players had athleticism, but few technical skills. What was your view of the football that you saw on the field in the USA?

Jason Wilcox: When I came to San Diego for the Man City Cup, the potential I saw blew me away.

THE ACTUAL POTENTIAL OF SOCCER IN AMERICA — WELL, IT COULD BE SOMETHING ABSOLUTELY SPECIAL.

Diane Scavuzzo: What has been the greatest challenge since taking over the Manchester City Youth Academy last fall?

Jason Wilcox: The greatest challenge for me has been allowing all the people to do something that I’m passionate about, and that’s coaching. I haven’t stepped away from the football, but I’m not coaching like I was.

As such, I control the football from a distance. I control the technical program. I will still control the movement of players and our methodology, but I’m not on the grass, I’m in a leadership role.

Delegating responsibility on the football side has been quite difficult, but one that I’ve become used to. I’m now in a process of restructuring and looking at the support that I need around me to be able to get outside whilst I’m not coaching. I want to be outside mixing with the boys and understanding what’s going on without being involved in it on a moment-by-moment basis.

I have really enjoyed getting involved with the bigger strategy of how we’re developing players on our pathway for our first team — this is something that really interests me. I’m loving what I’m doing.

Diane Scavuzzo: So what would you say is your role? Is it to develop players through the first team?

Jason Wilcox: I think my job, in a nutshell, is setting the vision and developing the strategy to achieve it.

We’re here to maximize the potential of every single member of the academy, whether that be players or staff. I don’t think you can have a strategy without having a clear vision of what we’re here to do.

We’re here to obviously develop players for our first team, with the understanding of the reality that not every player who comes through our system is going play for Manchester City.

OUR AIM IS FOR EVERY PLAYER WHO GRADUATES THROUGH OUR ACADEMY TO HAVE A PROFESSIONAL CAREER OF SOME LEVEL.

Diane Scavuzzo: What percentage of players graduating from your Academy do you expect to be able to sign a professional contract?

Jason Wilcox: Hopefully in future years, I’m setting the target that every player who signs a scholarship at some point signs a professional contract somewhere. How long they stay in the system of senior football, I don’t know, because that will depend on them and the football club that they go to.

I WOULD LOVE TO HAVE MAN CITY GRADUATES PLAYING ACROSS THE WORLD OVER.

As well as choosing the very best players for our first team, which is ultimately our ultimate aim.

Diane Scavuzzo: Players who attend the Man City Academy, they do not pay?

Jason Wilcox: No. Of course not.